Following on from my piece about a dream story that doesn’t exist, Jay suggested we write it in collaboration. Here it is.

Part one: The boat by Jane 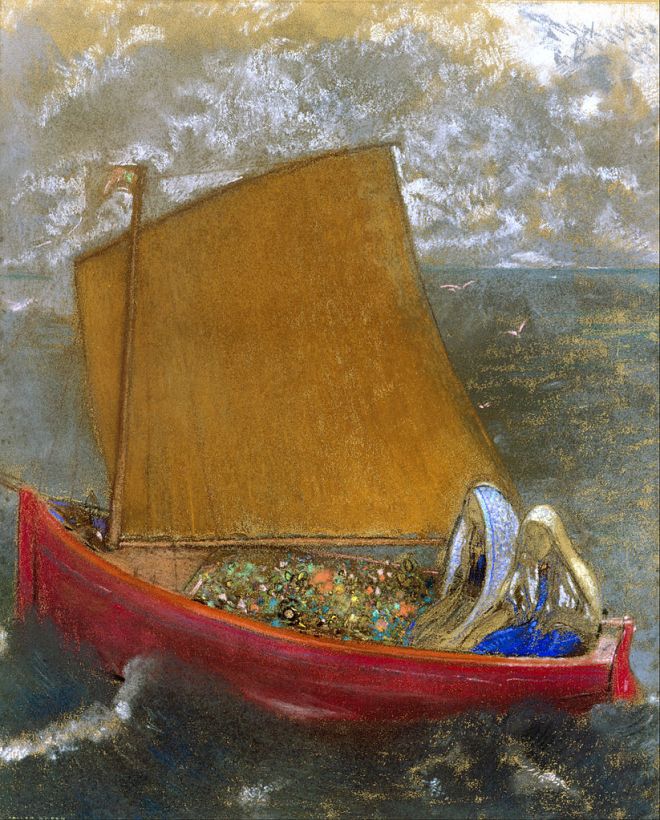 Ana cradled her daughter in her arms, the child’s head burrowing deep inside her thick cloak. It was behind them now, but what was before? She had thought it was all over for them when they were cast adrift. Belus had chosen a day of storm to be rid of her, and his face was full of laughter as the ropes were cast off and his men pushed the little craft out into the towering waves. He didn’t even look at their daughter.

Ana didn’t pray. Prayer had never done any good before, but she cursed. If she could have torn down the stars and cast them like thunderbolts into her husband’s grinning face, against the golden gates and marble towers, she would have done. Instead she filled the vessel with her fury and it flew on white sail-wings, like a great seabird, skimming the wild waves, though where it was heading, she had no idea.

Three days of storm, the sky invisible behind the lowering cloud and sheets of rain and spray, and their water was almost finished. But the storm was Ana’s fury, and its voice told her not to give up hope. She sat in the stern, as waves rose and crashed about the boat, holding her sleeping child tight, and she watched through the hours, until her watching and wishing produced a vision. On the horizon, the cloud solidified, the contours fixed, and by the evening of the third day, she was sure that she was looking at the cloud-wreathed slopes of a great mountain. Land.

Part two: The mountain by Jay

The howling wind of snow flooded their lungs and brought about brutal coughs. The older one fell to his knees guarding his face with bare hands.

“Father, let’s return! The air is growing lighter,” screamed the young one through the snow storm.

He waved his hands no and gripped his shirt; pulling himself up, “No, my daughter.”

His faint whisper almost brought a tear down her face.

“We need to find the White swan of the Great Lake for your mother; today, no matter what!” he spewed.

Tightening the harness around her waist, she began rest of the climb. Frigid air lulled her mind to death; white crows pecked them thinking they are dead meat. Pulling half of his weight, she reached the top of the mountain.

But, where is this lake, or the swan? It’s nothing but a bare land and a barren one. Life plucked from the soil by the cold hands of nature.

“Is that a hole?” she perched herself on the ground and looked through a hole to witness a body of water, and on it slowly and ever so gently, a pair of white wings appeared and with it two people.

“Wake up, Tanit,” Ana said, “the journey is over.” The child peeped out from the folds of her mother’s cloak and raised worried eyes. All she could see was water. All she could hear was the voice of the storm. Her mother stroked her face. “I know where we are.” She smiled. “Home”.

The mountain loomed large, and snowflakes stung her eyes, but Ana recognised the peak and she knew what lay beyond. Behind the mountain was a valley full of sun, of green forests and flashing streams. At the edge of the forest was a house, and in that house she had been born. The boat flew faster now, its sail billowing like the breast of a great swan. Even Tanit was fascinated now.

“Look, mama!” she shouted. “People running through the snow!”

A girl, lithe and fast outdistanced the old man, straight and strong, but slower. The girl was shouting, waving her arms wildly in joy. The old man stopped, wiped his hand across his face. Ana wondered how they had known. It could only have been her mother, she must have seen a vision of the boat on the sea and sent her father and sister to meet her. Mother. The boat was close enough to the shore now to hear Dido’s excited yelling, to see their father’s face creased in sorrow. Ana was suddenly filled with dread. She looked at Tanit, saw her mother’s features in her bright, eager face. She hoped this homecoming would not be too late.

“Father, there is someone down there,” she said.

“Under the mountain, how can it be? Do they look alright?” He asked.

“I think they need help,” she hammered an anchor on the ground, and lowered herself with the rope. She landed on the mast her feet balanced on the tip of it.

She led the ship out of the cave and towards her home. Once making sure they were safe, she went back to the mountain to her dad, and she returned to no one but these words, “I have seen the White swan of the Great Lake that your mother envisioned at the end of her days, and that’s how I know I am going to the same place as her. I can’t hope for a better place and time to go, and I know the white swan will look after you.”

She cried and cried, but she never knew that day how bright her future is.

Life after the Care Farm

scribebase.wordpress.com/
Stories From the Edge of Blindness

In 2002, Retinitis Pigmentosa changed my life. This is my story of a slow approach to darkness.

A Poet in Time