Back to the vet for a bigger lampshade…

the circle is joined.

The op is over, he’s back, complete with lampshade to stop him pulling out the stitches. This is going to be a long ten days.

operation over, stitched up,

Well, the vet phoned to say he hadn’t been able to do Finbar and could we take him home please, bring him back next week sometime. Two emergencies came in, more deserving cases, traffic accidents  (one death under the knife). What can you say? Finbar isn’t priority, he just has a useless, annoying lump. In a way I’m pleased he isn’t priority. So we brought him home. He had his lunch, went for a walk to check it’s all where he left it, and now he’s sleeping. There’s a questioning though, a hesitation in his gestures, because something different happened and he doesn’t know why. Was he bad? Was it a punishment? He’s dog napping, but he’s thinking about the why of it all, and will it happen again.

I have just left Finbar with the vet. He has to have a non-malignant lump removed. It started to bleed and won’t heal up if he keeps licking it. Best to get rid of it altogether.

He’s been left with a vet often enough to have wounds stitched up, so he probably knows the routine by now—jab, icky feeling, long sleep, icky feeling, sore stitches—even if this is a new vet.  I’m feeling rotten because, intelligent as we are, there are some things we just can’t explain to a dog.

I hand the lead to the vet,

dog turns and in his eyes,

So much we cannot say,

We can’t move for boxes now. I’ve packed up most of the kitchen utensils so I don’t know how we’re going to eat over the next few days. Still washing clothes, towels and bad linen and hoping it will all be dry enough to pack.

This, in 52 words is a description for Sacha Black of my ideal work place. With requested pics. In between the pics is a 52 word poem, added this minute as an afterthought. Two for the price of one.

I need a chair and a table and a laptop and an armchair for a dog and a window for light and a radiator for when it’s cold.

Birdsong beyond the window is nice and trees bending in the wind and at night a host of stars.

There’s a dog in the chair by the window,

And a cat on the sill in the sun,

There’s a rose on the terrace in full bloom,

And the breeze sighs that summer’s begun.

All I need is enclosed in this still space,

My silence within makes it my place. 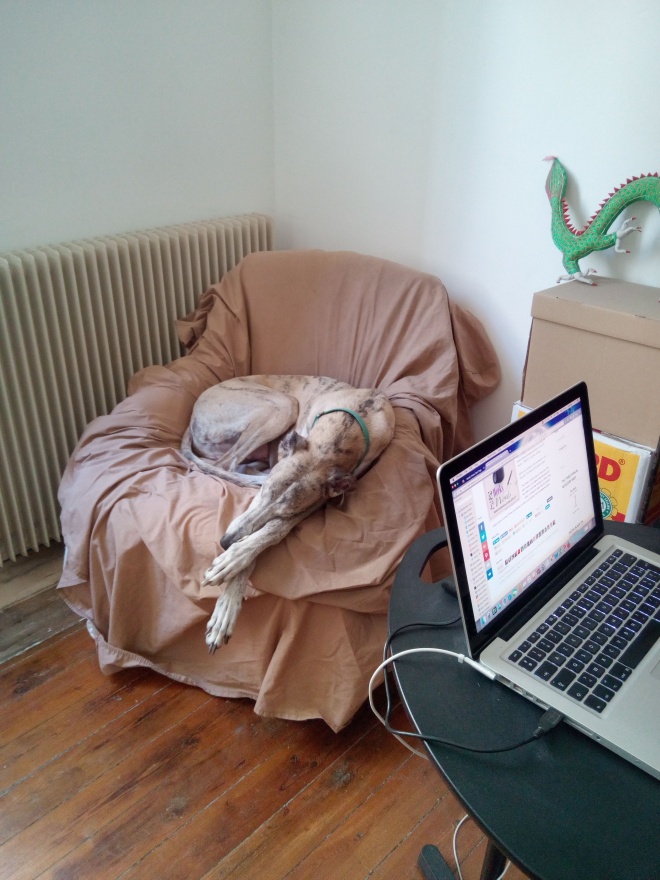 It’s seven years since we adopted Finbar. For seven years he has lived in town; his domain is bounded by the garden and stops at the front door. Every morning he has to be forced out of the house to go for a walk which isn’t a city pavement walk, it’s along the river and through the gardens where he has a whole pack of friends. Still, he has to be dragged out, trembling, because he’s afraid I won’t bring him back again. Now he has discovered Tamberlan, the farm named for some very mysterious reason after the Mogul emperor of Marlowe’s play.

Finbar now has a lot of meadow to call his own, and a small road that luckily only sees about six cars a day go past and a few walkers at the weekend. Because he has to charge over to them, barking just to let them know who’s field this is, and I have to go out and apologise. It’s a great way to meet people. 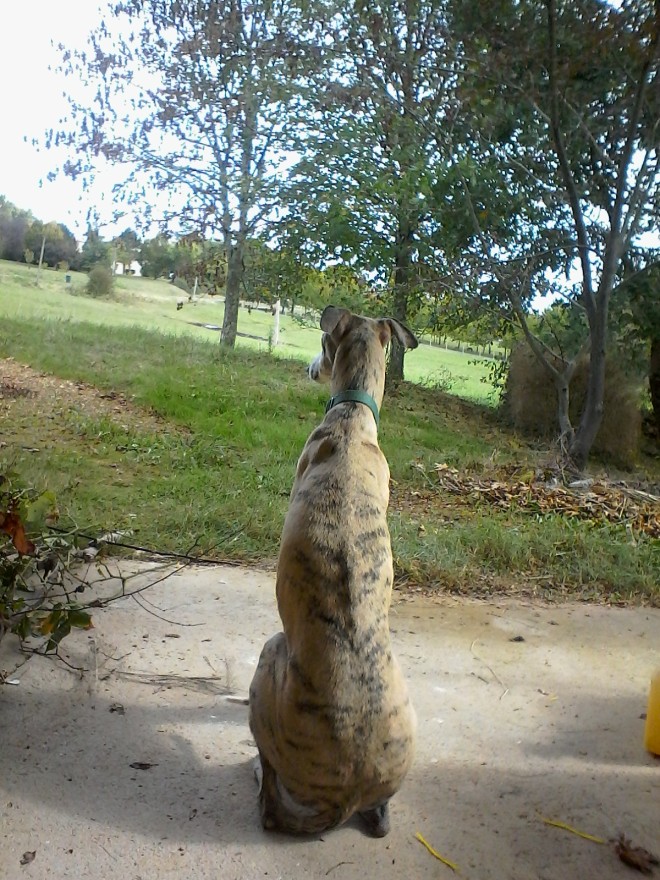 So now, he wants to be outside all the time, and when I say, time to go inside…

It’s three o’clock in the afternoon and I’ve just finished lunch after dumping Finbar at the vet’s for emergency surgery. Since he regained his doggy confidence (thank you Congo) he has been the life and soul of every dog party going. This morning he found a new bunch of friends, a right motley crew belonging to a group of rough sleepers. The dogs, six or seven of them, weren’t averse to the kind of rough stuff Finbar excels in when he gets excited, so they all had a ball. Until Finbar and the biggest of the pack had a difference of opinion about who had right of way. There was a bit of pushing and shoving and Finbar ripped his flank open on a broken tree branch.

It looked horrible, blood everywhere and a big crowd gathered including two (friendly) police officers. Most of them probably thought he’d been ripped up by the big dog with the spiked collar and were waiting to see the police perform a summary execution. A sympathetic cyclist phoned her mother to ask could she come in her car and pick us up but mother was at work. The police phoned into the depot to ask if there was a spare van available but the one with a space at the back for dogs was in for repairs. A municipal gardener stopped with his van and tried to make room among his material for Finbar, but it was too full up with trees and bags of compost. Somebody else tried to get him into a pram to push him to the nearest vet.

It was all very comforting except it wasn’t really. When you don’t have a car, and you realise all the sympathetic dog people who offer advice and help are also carless, that even the police don’t have wheels, you feel absolutely helpless. We live in a world that is so car reliant, yet so many ordinary people don’t actually possess one. Taxis won’t take bleeding dogs, so a girl offered to help carry him to the tram stop to get him to the nearest clinic. The police phoned up the clinic. Closed until end of the afternoon.

In the end, husband came to fetch us with lots of torn up sheet for a tourniquet, and a wheelbarrow. Finbar climbed in without a murmur and we set off for our vet who saw to him straight away.

I didn’t have time to post this before the vet phoned to say he was all stitched up and ready to go, so have just been to get him. Poor thing’s feeling very sorry for himself and is having difficulty with stairs. Even lying down is difficult. Being put together like a horse doesn’t help. I’d like to think this will make him more ‘reasonable’ when he plays, but I know it won’t. He doesn’t do anything by halves, and he has a horror of not being boss, not being the fastest. We can probably look forward to more big vet bills for a long time to come.

Desert dog
Fleet-foot,
Long and narrow
From head to sickle tail.
A streak of sunlight
He flies,
Skimming dry scrub
Bright dart
Colour of silver sand.
On his back
He carries stripes of shade
Like the slender leaves
Of the eucalyptus.

Since the work has been going on next door, Trixie has been very unsettled and doesn’t know where to put herself. She has been spending quite a lot of time in the bureau, mooching around and waiting for a seat to be vacated so she can squat on it.
We did give her her own chair and cushion, but she wants Finbar’s chair. And she wants it all to herself.
Trixie doesn’t like sharing, not even carpets. For example, an innocent dog might be lying asleep in front of the fire. Trixie NEVER sleeps in front of the fire, unless that is what Finbar is doing. This is how she usually operates.

A couple of minutes later…

Nobody knows how she does it, but the place is always vacated. At the moment, as I say, she is upset by the noise of the commandos next door and creeps into the bureau looking for a quiet corner. Finbar has got used to it and after voicing his irritation by barking when they start first thing, he ignores it.
This morning, Trixie came into the bureau and stood in front of Finbar’s chair, lashing her tail and looking intimidating. Finbar didn’t budge. He hadn’t been out for a walk and he was lying doggo, hoping I’d forget. Trixie climbed onto the chair and walked up Finbar’s back. She dug about between his back and the chair trying to get him to move. Usually Trixie can shift anything when she puts her back into it. Archimedes had her in mind when he said the bit about give me somewhere to stick my nose and I will move the Earth.

This time it didn’t work. Finbar is a big dog and I have always thought it miraculous that he manages to fold himself up small enough to fit in an armchair. You’d need a massive shoehorn to get him out. Trixie’s snout, for once didn’t work. So after an attempt to dig up through the bottom of the armchair, she sat on the back of it looking down, working out the options. The best option turned out to be me, turning up with the dreaded lead to take Finbar walkies. The look on that cat’s face I would swear was VICTORY.