I should have taken some photos… 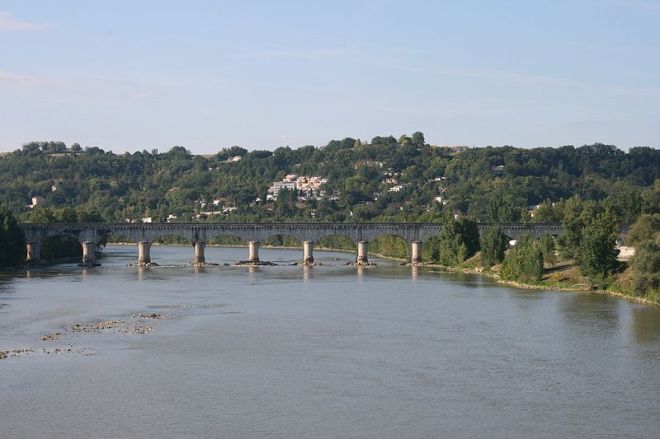 Wild is the wide sky streamered in pale cloud

roaring with the wind’s voice,

slow and silent the river

running to the wild wide sea

and the egrets wading in the shallows.

dark mirror of the bottomless sky

broidered with celandine and bright weed

No bridge of golden stone

bowing in its evenly paced minuet

to the city at either hand,

can compare in pure beauty

with such luscious liquid life. 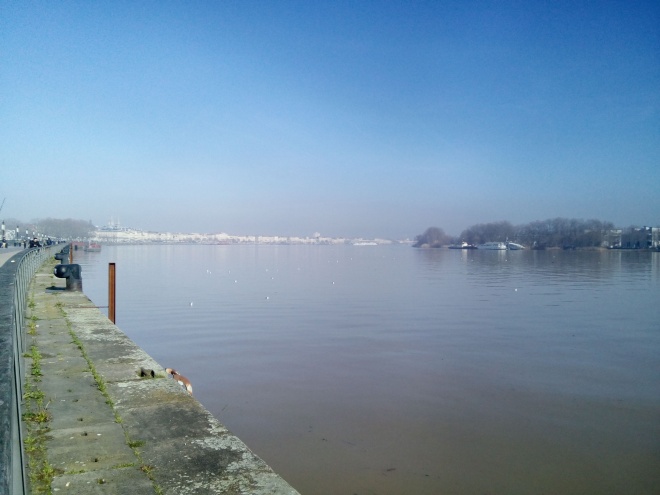 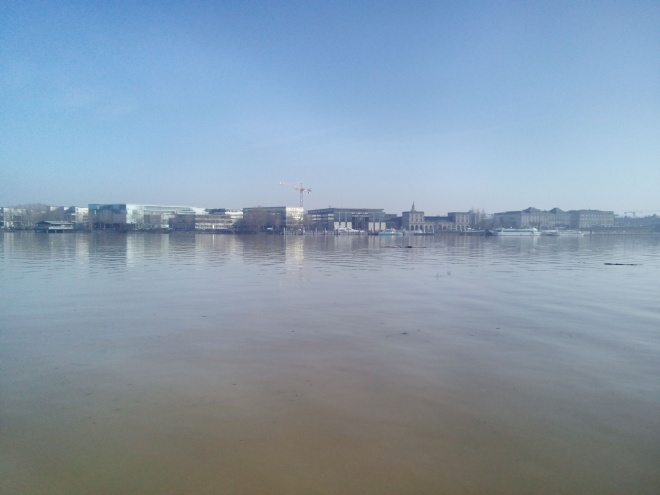 It was a glorious morning, misty but warm and springlike. The river was smooth as a millpond covered in drifts of fallen trees and tangles of  dead branches and creepers lifted by the high tide from the banks, offering the seagulls a free ride part of the way back to the sea. 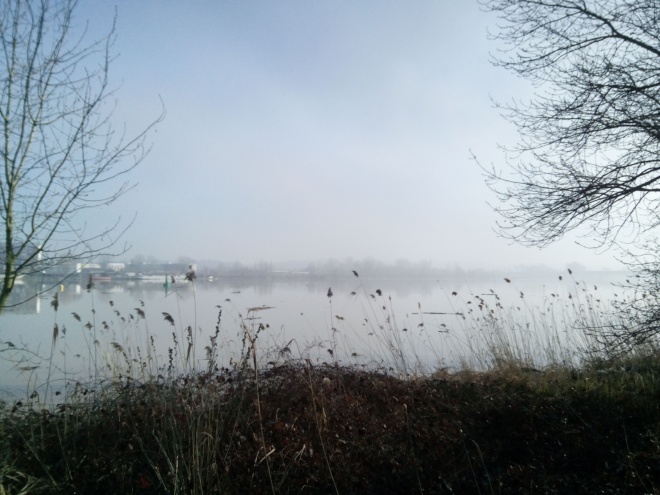 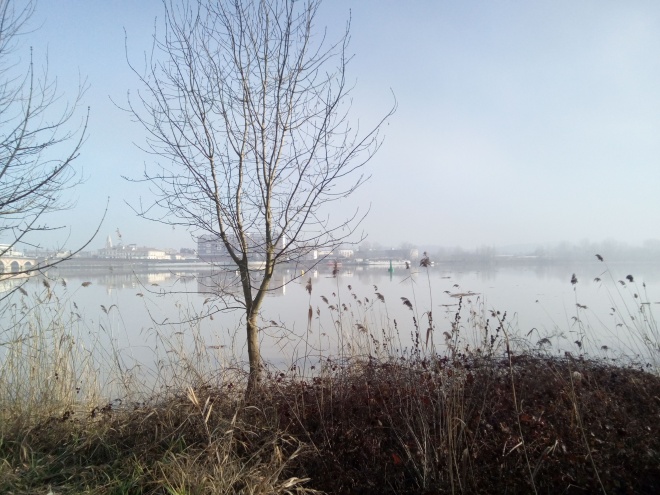 The Belem is back after a refit at her home port of Nantes, ready to take to the high seas again. 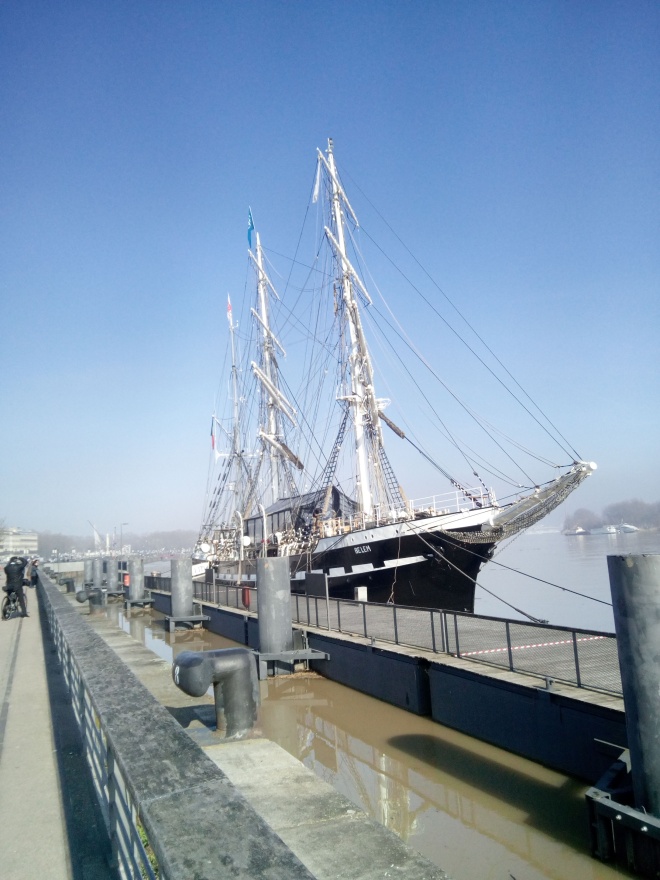 Some of you may remember that a couple of years ago I bought my first ever mobile phone, a little Wiko Goa. It was tiny but it did the job, and it had a camera that I was thrilled to bits with. When it liked the lighting, it took gorgeous photos. Unfortunately, in June of last year it stopped receiving emails, and sending me the photos it took was taking days, literally. it got very possessive of its pics and in the end, refused to part with them at all. So I treated myself to a new phone, an ultra cheap Chinese phone but which claims to have a super camera.

I’ve had it for a fortnight now, and tried out the camera during the freezing cold miserable weather we’ve been having. I was a bit disappointed with the result; everything looked over-exposed. However, on fiddling about with it this morning, I discovered I’d had the flash turned on all the time, and it actually takes pretty good photos for a €60 phone.

These are the photos I took this morning. 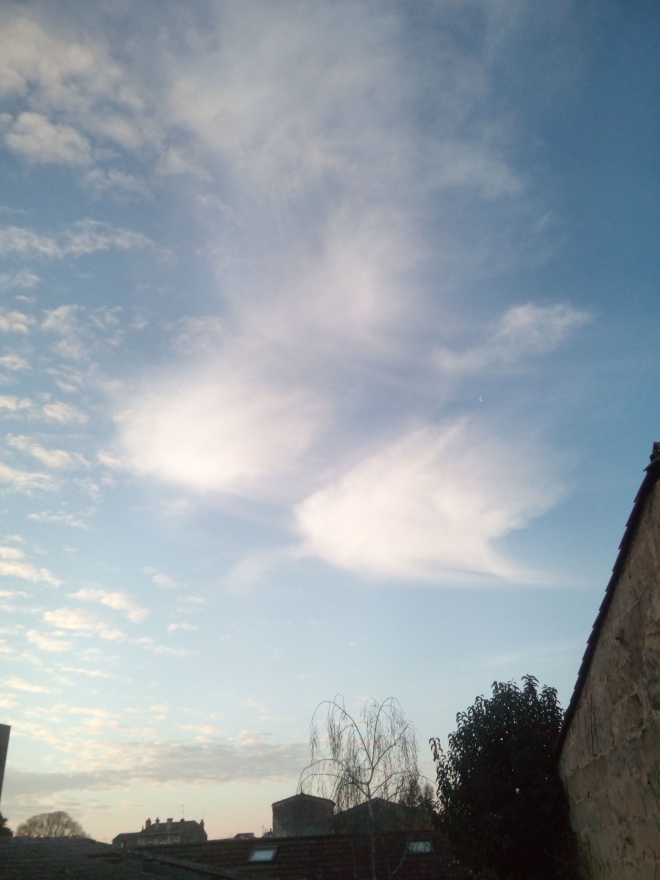 Every time I stop, Finbar jumps over the parapet. Even though the tide is coming in, it’s not the moment to fall in. 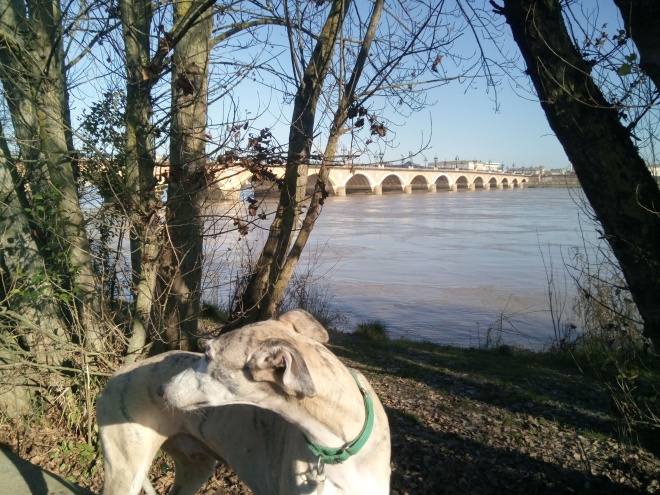 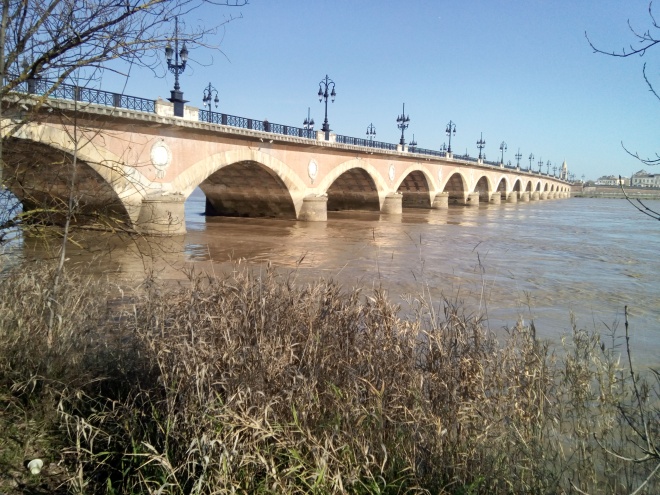 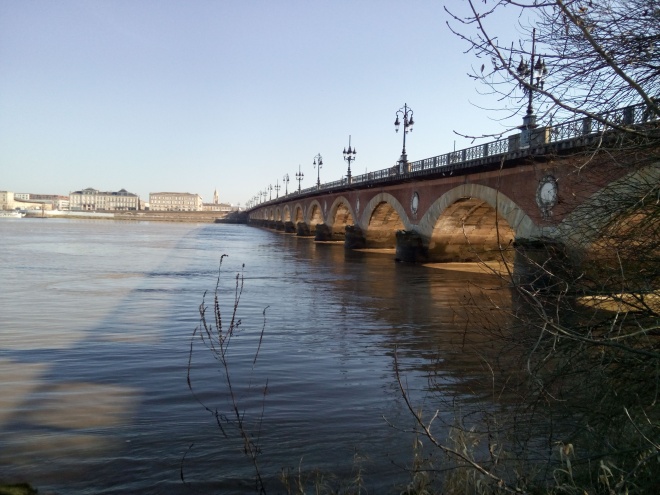 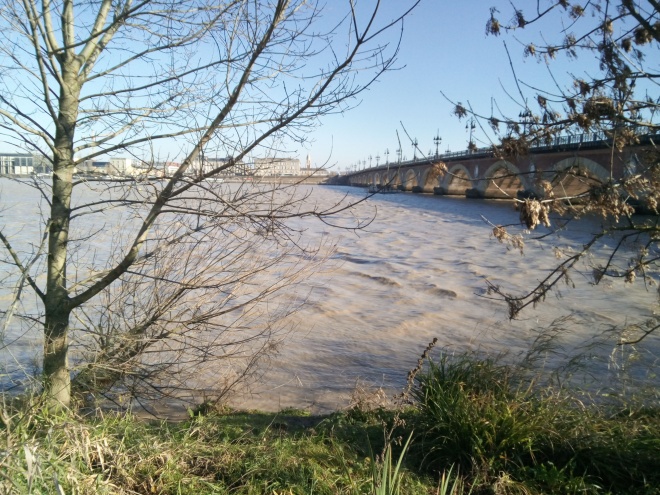 By the rippling water, leaves blow,

Clinging to the barest boughs,

Waiting for the midday sun’s glow.

By the rippling water, leaves blow,

By the rippling water. Leaves blow,

Clinging to the barest boughs. 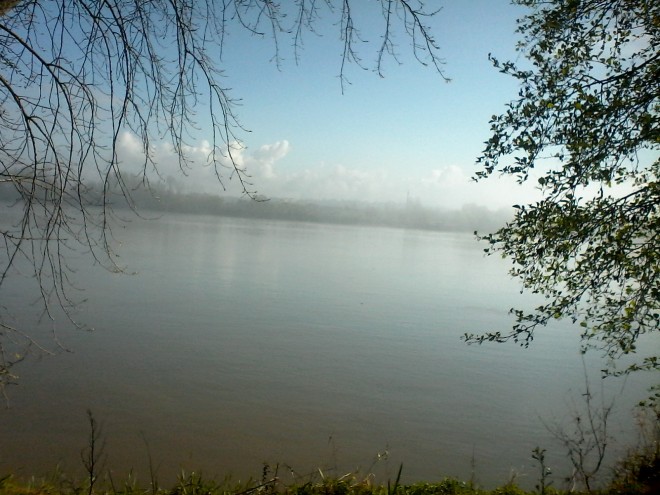 Of the ebb tide,

Their dead wood rafts to the sea.

Though I shall be,

Far from this broad sky,

And the poplars where the robin sings.

Still I will keep,

In waking and in sleep,

The image of this, my river flowing,

In the foreign place where I am going.

I’ve posted this pic, not because it’s specially good (it’s not) but because it made me smile. Solitude it is, taken at dawn this morning down on the quays at Bordeaux, with a thick mist on the Garonne. Calm and peaceful. Except, if you look in the middle of the bank of mist, you can see the Horned One making its way up from the sea…

Actually, the horns are all that you can make out of the towers at either side of the new Chaban-Delmas bridge. 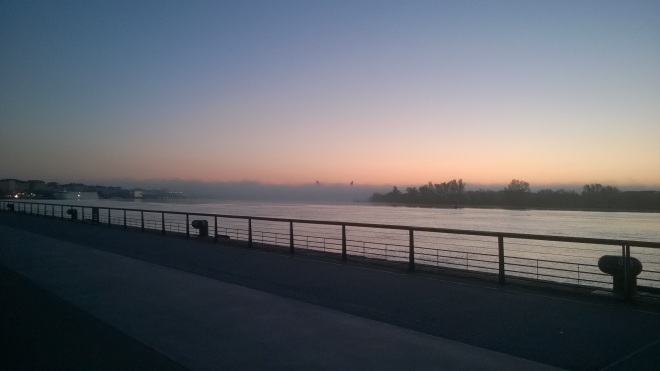 Visit Hugh’s blog for some much better, proper photos of solitude.

I saw Ali Isaac’s entry for Hugh’s weekly photo challenge and decided to post a couple of pics of one of my favourite places, the Garonne river.

This one was taken at Tonneins, close to where we hope to be moving shortly, looking towards Agen and the hills of the Nérac region. 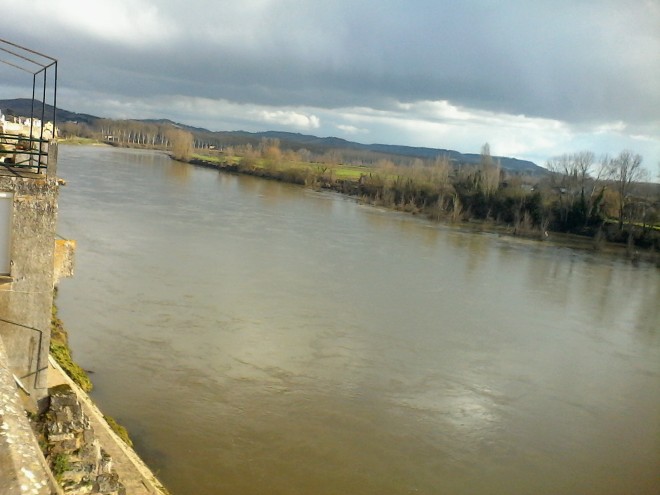 The photo below is of the same river Garonne ,taken at Bordeaux last autumn on a particularly placid morning. I walk here every day and find the atmosphere soothing, even though the river runs right through the city and a busy artery isn’t far away. I’m glad that the house we’ve found in the countryside is also close to the Garonne. To move away from the ocean is a wrench, but at least we’ll have kept the river. 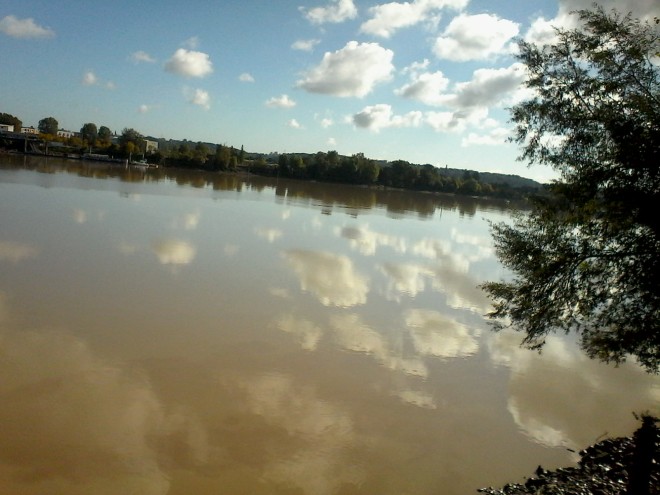 If you want to join in, here’s how.

1. Take or choose a photo that you’ve taken that for you denotes, calm.
2. Create a new post on your blog entitled “Hugh’s Weekly Photo Challenge: Week 16 – “Calm”
3. Add the photo(s) you have taken to the post and tell us a little about what you are showing.
4. Create a pingback to Hugh’s post or leave a link to your post in the comments section of said post so that other participants can view your post.

Yesterday we went to start the proceedings for the acquisition of what will one day be our new home. Buying a house takes ages in France and as our place is on agricultural land, it has to be offered to the local farmers’ association first. They won’t make up their minds about whether they want it for many weeks.

We talked to the grand-nephew of the owner about aspects of the property that he would know about, like who has been responsible for cutting and baling the hay, who is responsible for keeping the vegetation along the stream under control, and something that has been worrying me, how will the neighbours take to Finbar.

There is a section in the country code referring to sight hounds that forbids their use as hunting dogs, and insists that they must be kept on a lead at all times. Hunters hate them because they chase anything that moves, and particularly rabbits and hares. Chase, but not necessarily catch, the reason for the Spanish Galgos being abandoned in their thousands after every hunting season. In the countryside, the hunter has a lot of privileges, and can chase game that have been started across anybody’s land. There have been cases where a deer has taken refuge in somebody’s front room, only to have the hunters barging in claiming that the poor creature be handed over. Hunters are trigger happy. They take pot shots as animals and people that annoy them.

The good news is that not only are the neighbours not hunters, but there aren’t many rabbits to send Finbar crazy. Even better, deer come onto the property to drink at the stream. As long as Finbar leaves the deer, the sheep and the owls alone we should be okay.

I did try to take some photos of the house, but after a single shot the camera gave up the ghost. My phone only does outdoor pics with any great success, so for the moment, until I get the pics other people took, I’ll just post a few photos of the nearest small town.

Tonneins in on the banks of the Garonne, built on river cliffs with a promenade all the way along the foot of the embankment. In the main square there’s a bandstand with a splendid view of the river. The guy in the pic is nothing to do with us. 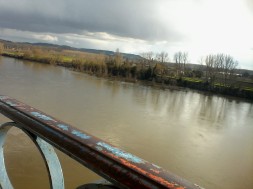 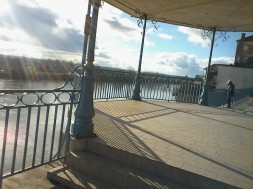 Hundreds of cranes flew over while we were there. You can just about see them, tiny specks against the white cloud. 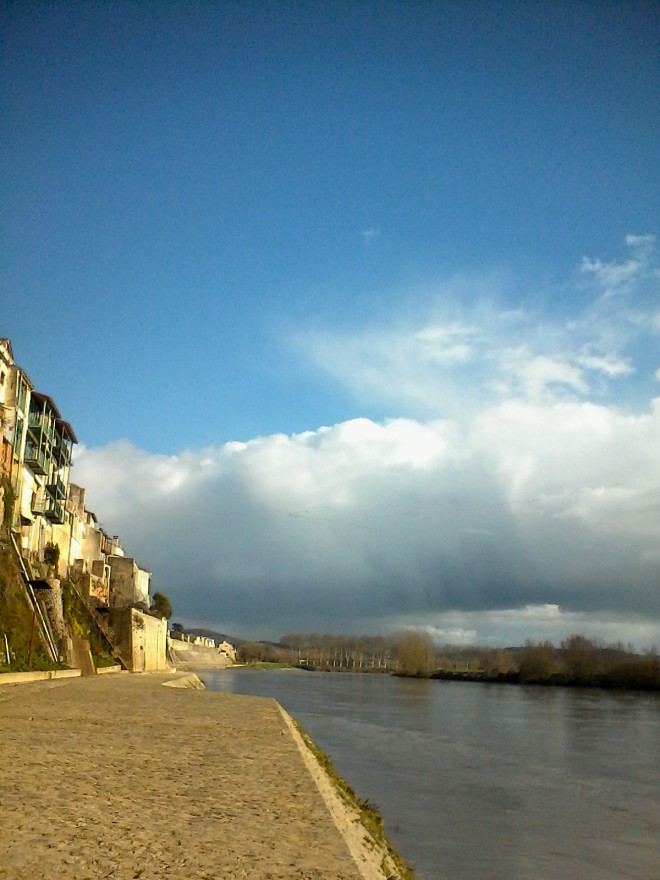 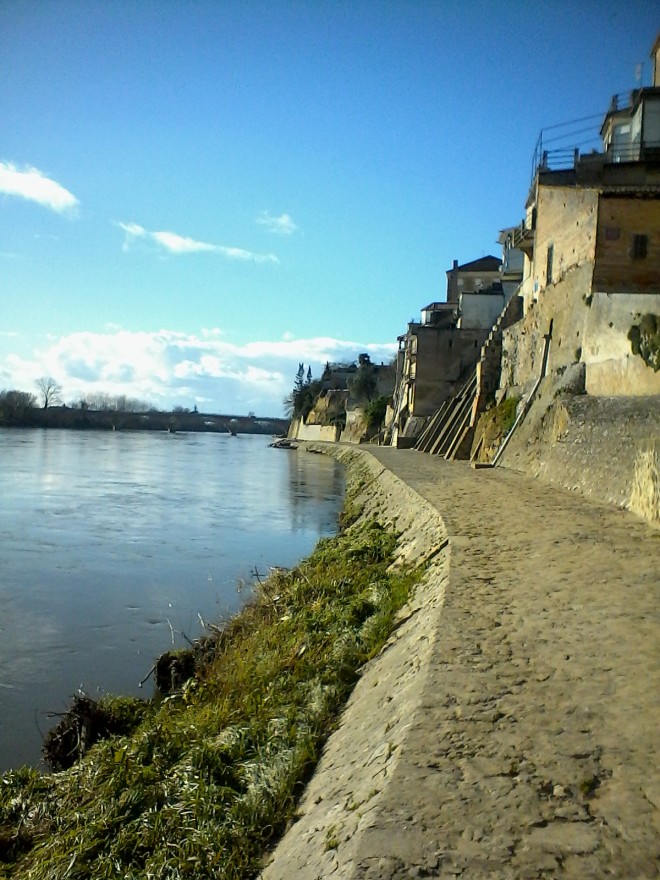 Along the walls there are old stone water chutes that send rainwater cascading down to the river, after a brief and picturesque stop over in a stone basin. 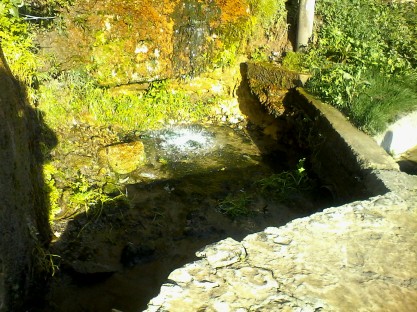 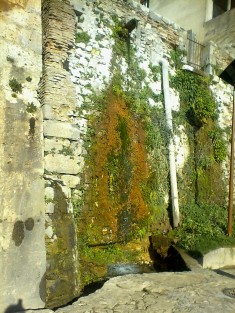 Beneath the bandstand are the public toilets. Not a place I would visit in the normal course of events, but somebody had a pressing need, so down we went. They were medieval but clean. The picture is from the toilet window. There were cormorants flying past, out of the shot too quickly though. 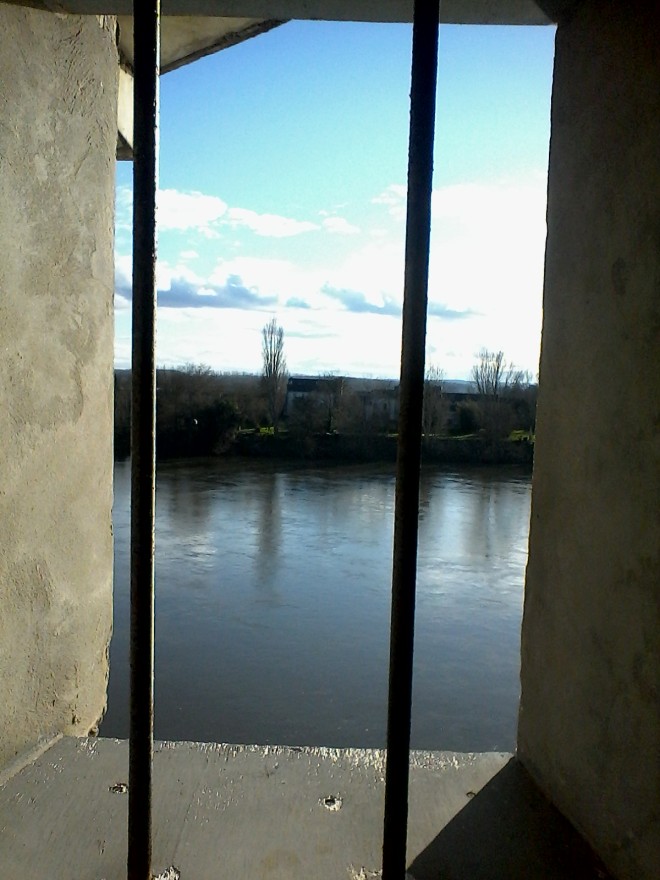 And finally, the kind of strange shot my telephone does best—the ghost in the machine type shot. 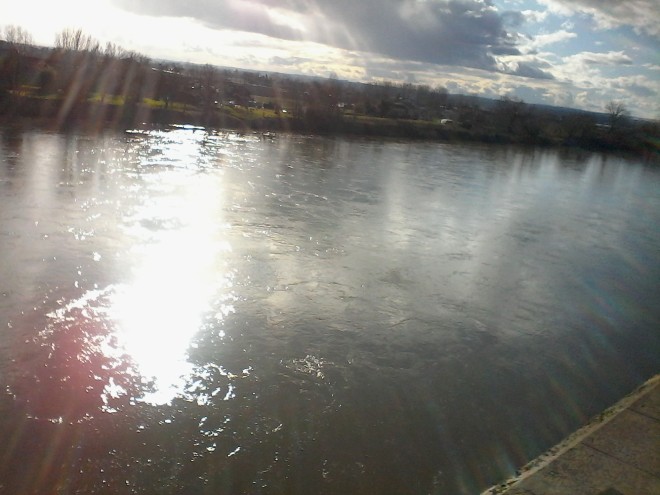 I didn’t think I’d find a haiku for this one at all. Ronovan’s challenge is here if you’d like to participate or just read the entries. 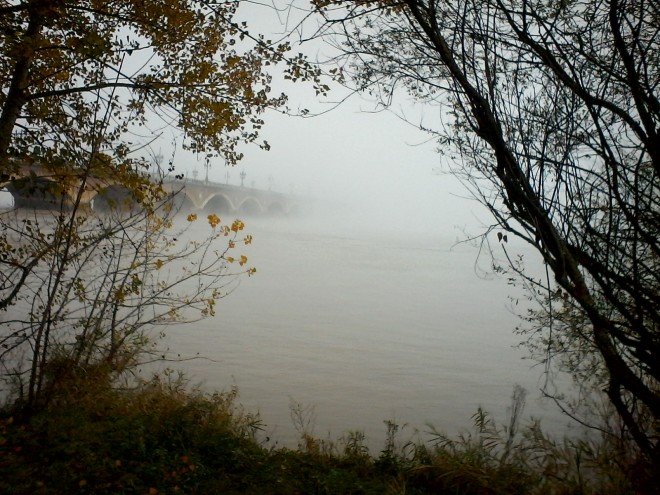 Lost beneath the mist,

More gulls and the effect of light. The eye doesn’t pick up the change, but the camera does. From the same place, at the same time, photographs taken into the light and with the sun behind. Stunning difference, but it takes technology to see it. 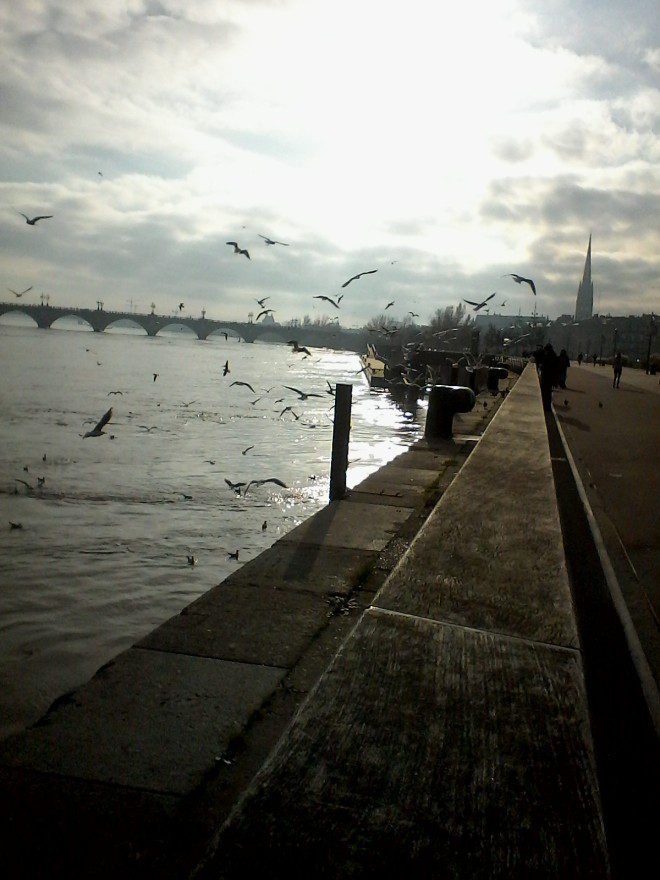 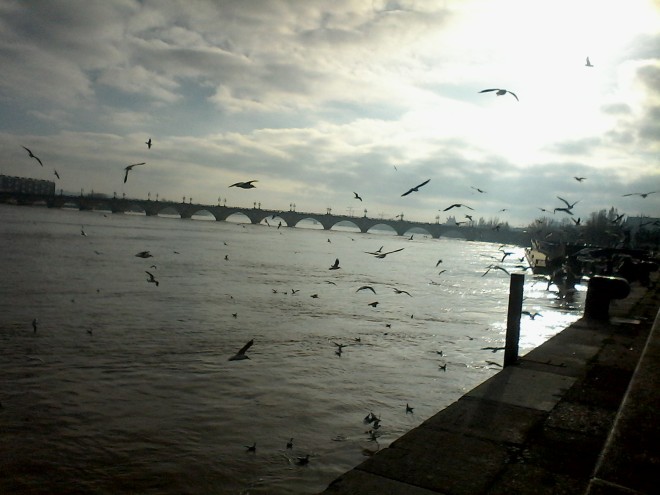 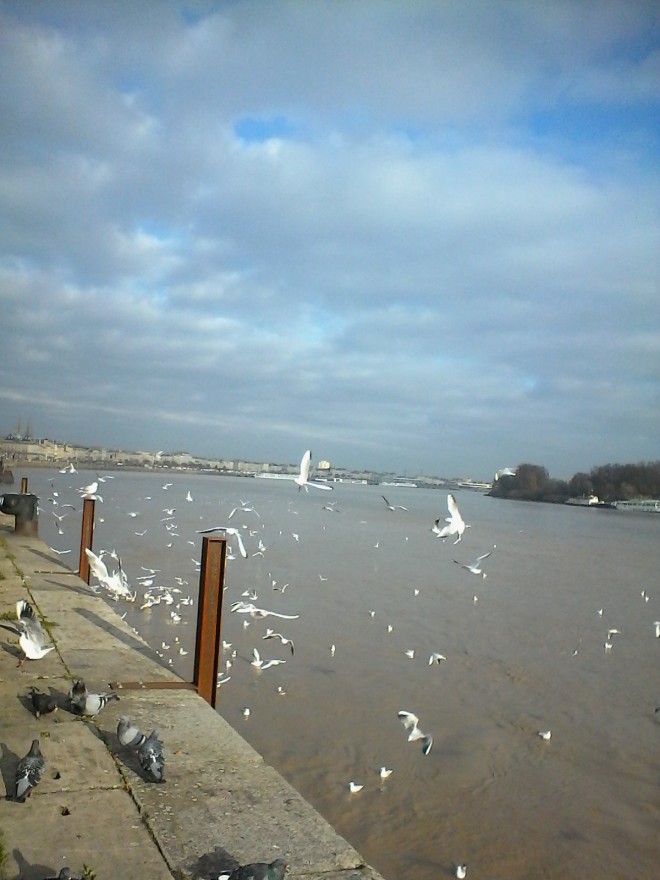 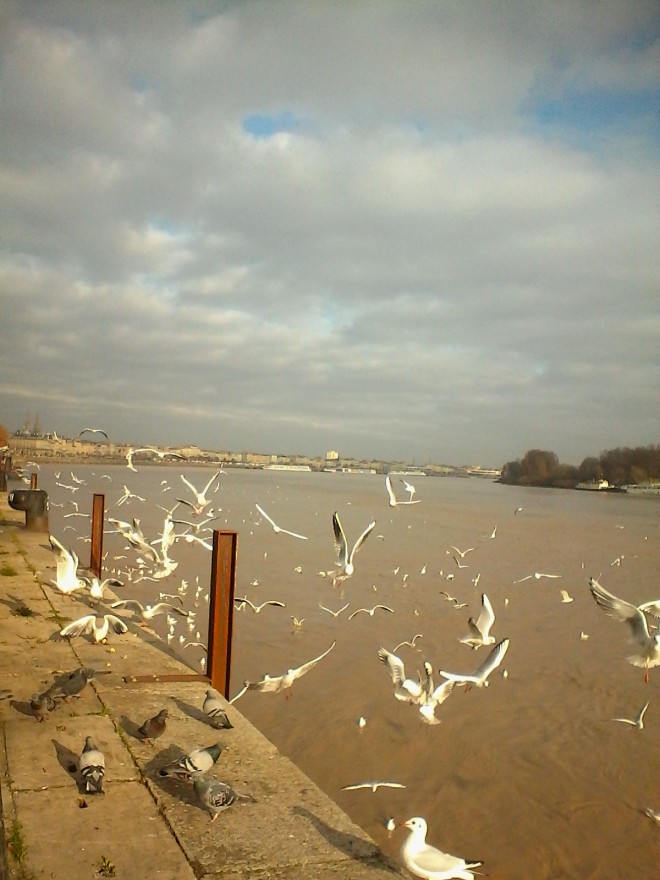 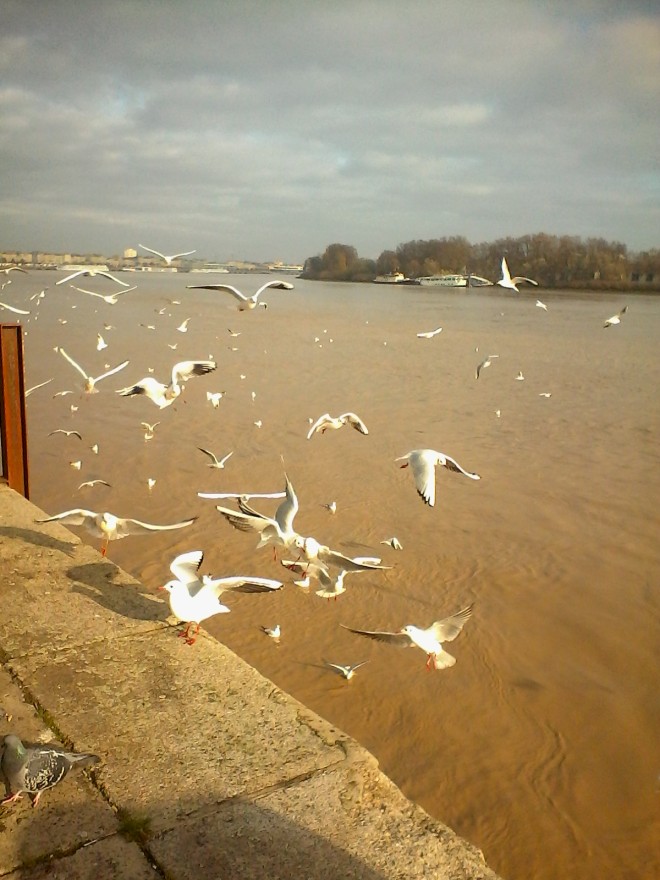 buoyed up by river mist

suspended from the stars

find what was lost

and guide it home.

a place to smile