Today is the official launch of Grá mo Chroí, and what might just prove to be the first instalment of a clutch of retellings of Irish myths. It has been a real labour of love and I hope it’s a success. Not just because every writer wants their work to be appreciated, but because these stories belong to everyone and to share them is to be part of a historical process, if that doesn’t sound too pretentious.

Available from
Amazon UK
Amazon US

Unless you’ve been living under a stone for the last few weeks, you will have heard that Ali Isaac and myself have got together a collection of our retellings of some of the great love stories from among the Irish myths. This is the official cover reveal for Grá mo Chroí. Second really because I see Ali was up sometime before dawn in her excitement to blog about it. ☺

It might seem no big deal to those of you with blockbuster epics under your belt, but we have gone back in time, to the golden age of Irish storytelling, and we have added our own small contribution to the great tradition.
Susan Toy, blogger, writer, and very perspicacious asked, why did we decide to do this? Good question. Why did two writers who have never even met decide to produce a collection of stories that, let’s face it, have already been told many times?
The easy part of the answer is that if your roots lie in Ireland, you will know that the myths and stories you were brought up with are at least as true as the Magna Carta and the Wars of the Roses. We are dealing with real people who have landmarks named after them and local legends associated with them.
Both Ali and I are familiar with some of the versions of these stories and have had great fun researching some of the versions we didn’t know. Because unlike the Wars of the Roses, for which there is a fine, blow by blow account, the Irish stories have had so many interpretations that some have been tempted to doubt they happened at all, incredible as that may seem!
The Christian monks wrote down the first versions. Their ecclesiastical superiors disapproved and made them do it again with saints instead of sinners. Fiery Brigid becomes a nun, and Saint Patrick sticks his oar in wherever it’s humanly possible.
But if you dig deep enough, dump the Christian misogynist overtones, you get some beautiful stories, full of real people with real, modern emotions. Irish love stories are not soppy and they are rarely about rescuing damsels in distress. There is almost always blood shed, wars waged, and the damsel is as likely to be waving a sword about as she is to be cowering behind the battlements.
For a writer who loves the poetry in words, these retellings are pure self-indulgence. For a reader who enjoys reading a bit of prose mixed in with their poetry, these stories are for you. Our gift to you for Valentine’s Day, especially for those with a drop of Irish blood in their veins, hoping to rekindle a dormant passion.

I thnk it was some time in November last year that Ali Isaac first suggested we each write a retelling of an Irish legend to give away in a booklet which we would then fill up with promotion for the books we have already published. The idea took root, and before we knew it, it had metamorphosed into a collection of love stories that we would publish for Valentine’s Day.
Valentine’s Day, as everybody knows is half way through February. And before that there’s Christmas to get through and the assorted afflictions that health throws at us at this time of year. That didn’t give us much time.
I’m proud to announce that we have done it! Our collection of love stories from Irish myth is uploaded to Amazon and waiting in the wings for the big release day. For almost two months we have been living and breathing Irish myth, heroines and heroes from a very different time. People were different then, incomprehensible in many ways, even though the rawest of the emotions probably haven’t changed much at all over the centuries.
The picture below is one I downloaded because I liked the colour and the movement. But looking more closely, I see, or I think I see, some of those differences of sensibility that separate us from our distant past. The picture is entitled Caparison, and so is the poem. 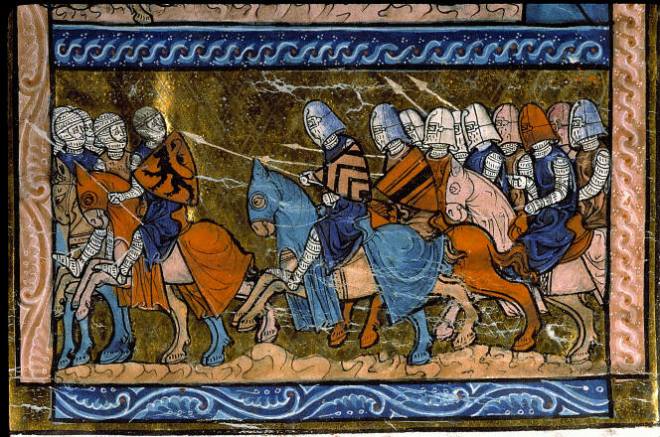 Was life really so simple then?
Wars fought and won
With just a handful of rockinghorse men?
What were they defending,
Land, lord, families?
And did they ride out with these thoughts,
Vivid as the sun,
Carved on their hearts?
The turned, worried faces say it all.
Death approaches a spear’s length away,
Chain mailed and caparisoned.
Men’s tiny faces furrowed in anguish,
So clearly drawn,
And the faceless helmets,
Sinister in their repeated facelessness.
This we understand,
The fear, the grief, the shame.
But there is more,
Equally important to the artist’s eye,
Pretty ochres and shades of Sienna,
Terracotta,
The swirl of waves, fins or blue leaves,
But not a drop of blood,
Not yet,
Not until the end.
All is movement across a muddy field
And all the horses are smiling.