I sit on the cliff top and watch the lights come in the houses in the town. It isn’t far, just the other side of the promontory, but the bay is deeper there, and the strand stretches silvery smooth as far as anyone could walk in an afternoon. Here, the rocks tumble into the sea, reefs snag the waves beyond the low tide mark and gorse mingles with the sand down to the pebble cove. Night falling on the sea is different here, wilder. That’s why I choose this place to sit and listen. Perhaps one night I will hear his voice.

He used to say that it doesn’t matter which part of the ocean you swim in, the memories are the same. The water remembers everything. It carries the same messages from Pole to Pole; whisper in one shell and listen to another, the words will be the same. I still don’t understand entirely what he meant, but it’s comforting to cup my hands and draw up the water from a rock pool and think that he hears it dripping through my fingers, wherever he is.

I walk across the smooth sand to where the dying waves lap the toes of my shoes. The water is cold even on summer nights and I see the stars’ glitter reflected on the oily waves. I listen, but there is only silence except for the gentle hiss of the backwash through the shingle. The stars listen too, but his voice is absent. He told me they forget, that time runs differently in the sea, and I know time is not on my side. How long before I am nothing more than a vague recollection, a footprint in the sand, the echo of a sweet song?

However long it takes, I will send my messages in the water, the beats of my heart, until he hears and remembers. Tonight though, the wind blows, and I pull my cardie tighter. It’s time to leave. I feel it these days, the cold, even in summer. My bones feel winter coming and I wonder if he feels it too in the chilly ocean. Feet drag through the clinging sand and the steep climb up to the cliff road; each season it grows a little harder. Before I turn my back on the sea, I peer across the waves, searching in vain for a sign, and I send him a thought.

Remember. Before it’s too late

This 100 word story is for Rochelle’s Friday Fictioneers, based on the prompt photo taken by her lovely self. Thanks, Rochelle 🙂 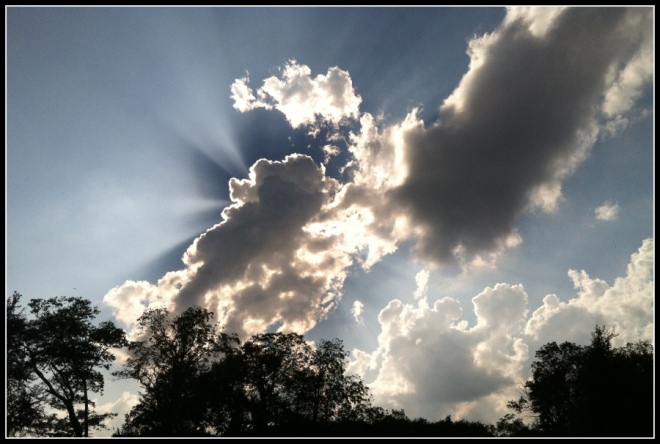 It was a strange morning with an electrical tension in the air instead of the usual spring energy. I wondered if there wasn’t a storm on the way. With a frown, my husband pulled over, stopped the car and got out. I followed him as he stomped into the field.

“What’s the problem?” I asked.

“That.” He pointed at the beautiful almost biblical sky, dark cloud silhouetted against a fierce light that streamed in broad bands of searchlight brilliance.

His finger moved to the brightening hills that rimmed the other side of the sky. “The sun’s over there.”

Assembling the Jigsaw of a Febrile Imagination