Since mid-July I’ve been working on a complete rewrite of The Green Woman series, and a couple of weeks ago I finished it. It has grown by 100,000 words and is very different to the original in just about everything. The central idea is the same, but not the way it’s presented, and the characters, the tone and the story threads are all different. It’s gone from straight YA to an older readership that I would describe as crossover adult.

About ten days ago I started revising another manuscript that I like a lot but was far too short. It’s now finished, 13,000 words longer and just about passes muster for length. I have two other projects that are started, and I should choose one of those and get on with it, but I think I need a break first—too many characters and too many stories still squatting my brain.

The brilliant hot summer weather has just broken this afternoon. Not with the thunderbolts and torrential rain we were promised, but the persistent wind rose to violent gusts, bringing rain clouds. It rained for a half an hour, the wind dropped and the evening is dull and grey. Summer, I think has finally gone. 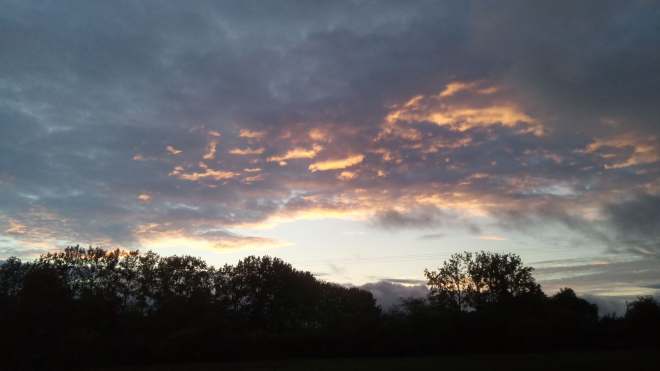 The change is coming, the turning of the year into the dark time. South wind blows blue and the sky is still full of summer, but the shaking of the trees is eerie. Not just the whispering, sea-hiss of the poplars but the ploying and raking of the oaks and the alders, green leaves silver-backed writhe in torment on twisting branches with the roar of the ocean. Soon, the wind will turn, bringing cloud and rain, and the leaves will give up the unequal fight. Are they leaves or birds that scud across the meadow?

Do the hinds count the young ones left of this year’s brood, mourn the lost and cover the survivors with panic-stricken care, or do they cast a cold eye on the changing sky, the flickering leaves and listen for the heavy human tread, the snuffle of dog in the bracken? With grace, they melt into the shadows where perhaps another day waits at the other side. 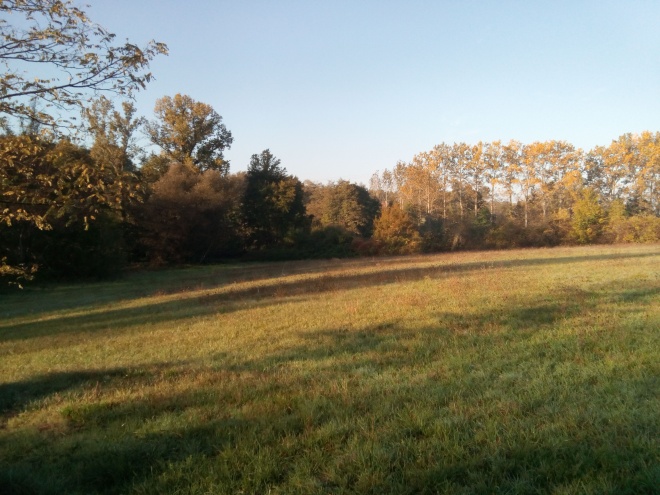 Another Rhyme Royal for the dverse prompt, because I like this form.

On these golden mornings of October,

When stars have set and leaves fall without number,

Into the dewy meadow where mists swirl,

I hear the shattered peace, the bright jays’ skirl,

And wonder will I cease to feel the pain,

Of clenched heart, when the guns spew mortal rain.

by November their red gold

When the noonday sun

is pale as dawn and wind bites

No sky that day just fog dense and damp

And the bite of coming winter in the air.

Shaking out the children’s winter coats

And you, my little salmon, beating back upstream

Not yet ready, clinging to your due of paradise.

Two days they urged you to leave and you would not.

In the end they gave you little choice.

With no roar of rage, a sigh of regret only

You left your dark watery cave

And salmon leapt into my arms

Your face as bright as any sun.