For the dverse prompt, including the lines from The Song of Wandering Aengus by WB Yeats:

‘I went out to the hazel wood,
Because a fire was in my head.‘

I went out to the hazel wood, because a fire was in my head, but the fire, I took with me, and the rushing stream couldn’t quench the flames. I listened to the blackbird, but his song was out of kilter, and the sun streamed slantwise through the pale green leaves.

They say the world is spinning to its end, the heaving oceans empty of their fish are filling with our discarded plastic. I listen to the blackbird but his song is not for me.

They’re shooting in the chase, I can hear the horns and the coarse voices shouting, coarser than any dog giving tongue. As if we needed more blood. The world is drowning in it.

Listen, blackbird, to the pale-winged moths, their song is more in keeping with these end times. Hush. I hear the ocean rushing over the world’s edge.

Tis the season, so here’s a festive decoration from outside the barn door

and one from inside the barn door in the kitchen

House hunkers down. The folk that pad and trot around its walls the night have gone. Only the birds, ever-hungry, ever-cheerful chatter, fluttering from tree to tree and into the porch after seed and other necessities. A deer family ambles through the willows by the stream. Dawn sun streams gold, a glimpse of heaven before its flow slows and ceases. Cloud thickens.

For Sonya’s Three Line Tales Prompt. Don’t ask what it means. It’s just one of those days.
photo by Ashley Byrd via Unsplash

Paint the things that aren’t there; fill in all the unseen spaces, leaving blank walls pristine.

Shuffle the anxious worms that suck and strip the joy from life into the slippery tubes,

stopper them up, close your eyes and breathe only the white purity of thoughtlessness.

photo by Sunyu via Unsplash

I can’t write your story, but it’s written in your eyes, the days of tracking, the fear, the fatigue and in the end, the men with spades.

They dig until they reach the heart and drag it out, still beating.

I have seen them, the cubs still blind, tossed in the waste from the cowshed, and whenever in the cool spring night, I hear a vixen call, I think of them, and all the others.

For Sue Vincent’s Thursday challenge, a sort of prose poem with WIP in mind.

The millrace runs but there is no more a mill, and trees grow now where wagons once stood with their head-hanging horses, waiting to be loaded with their bolts of finished worsted.

The beck still babbles, its leaping waters clearer than they ever were in those days when wild nature served one purpose—to be harnessed to the fiery chariots of the fiercest of men.

Fierce and proud, with a blindness when it came to the suffering they caused, with their grasping greed for profit, were the men in paunch-vast waistcoats.

If they didn’t see the misery in the humanity around them, how could they have noticed when the mill streams fouled were running black or blue or cimson with dyes from the washings of the vats?

But their ferocity was puny in the face of wakened nature, when the stones had had enough of blood and desecration, and the sacrifice of beauty on the altar of greed.

Where is your monument in stone, in black Millstone Grit, your dark, satanic symbol of industrial success?

We know where you are now, Mr Mill Owner the Mighty, you are in the deep dark hole where the dead men go.

Still water holds memories, of love and loss, death and growing, peace and tumult. A cloud mirror sometimes, speckled with bird wings, and sometimes a raging, silent fire with the trampling boots of soldiers, flame-haired and steel-coated. Sometimes.

I can sit on the bank of any lake, toss a pebble and watch the ripples, knowing that in the tiny bore radiating out from a central force is a story in momentous movement.

Sedge fringes stories and water birds illuminate the margins. Listen and you can hear the voices of the past, the crying in pain and anger, laughter in the sunshine, weeping beneath the rain.

Wind bends the dry stalks, ruffling and rippling, but when the wind holds its breath, when I listen, watch, deeper than the drifting clouds, I see the faces with eyes the same as mine or yours.

Words, though the tongue is not one I know, roll into the ear and the story they tell is universal, never dies, a longing to be loved, to find peace, to find peace.

Two pieces for dverse this evening. The first is flash fiction, the second a prose poem, both are less than 144 words. The first responds to the prompt, including the line from Louis MacNeice:

There are moments caught between heartbeats.

The prose poem doesn’t, because it isn’t flash fiction and because I split up the quote.

For some people there are lifetimes of glitter and happiness, and for others there are moments. Caught between heartbeats were our moments, a brief time of happiness when the world stretched ahead into more futures than we knew what to do with.

I knew all about you, your name, the colour of your hair, how you would be wild and artistic and sing like a lark. It was for you that we took the apartment near the school with an extra room and bought a pile of useless things for you because that’s what people do.

Then suddenly, between one check up and the next, you had stopped being, the chain of heartbeats that linked you to me to life, a dazzling future had broken and the round pearls had rolled away into the dark place where heartaches gather.

There are times when there is no time to count the passing of seconds, when the world fizzes like fireworks with whirlwinds of wild happiness, the births and marriages, the fallings in love and the tumultuous giving and receiving of love, when the moments pass so fast there is nothing between them.

And there are moments that drop one by one, echoing loud as raindrops in a bucket, that we try to catch and hold, to pile them like stones, a dyke against the pounding of oceans and the suction of the ebb tide, the moments of single breaths caught between heartbeats until the last heartbeat misses, and the breath escapes on a fading sigh.

A hen harrier circles the ploughed field, circles and

circles then swoops, and a flock of pigeons rises in a

away from the field drawn back again by the knowledge

of food, circling, in silver flutters beneath the golden sun.

The harrier, having missed the kill waits circling and

in noisy mob pose in the trees. Pigeons panic a silver

cloud over the poplars, wheeling away and back while

crows wait and harrier watches. Over the ploughed

and the harrier is there, a pale, ghost-winged presence.

clutching the air like hands clawing as they pivot on

nothing, yelling and snapping six black-cloaked

wheeling, rising up beneath dropping from above,

away, leaving the silver cloud scattered among the furrows

and the black-cloaked vigilantes masters of the winter air.

On Saturday, the Ekphrastic Review published a short piece of mine based on this painting, Schöpfungsgeschichte II  (Creation Story) by Franz Marc. He painted it in 1914. By 1916 he was dead, killed by a shell at the battle of Verdun.

Thank you Ekphrastic for giving my poetry and prose a home with a window.

You can read it here

This haibun is for the dverse prompt, a forest, natural, restful scene. An ode to peace, I suppose. 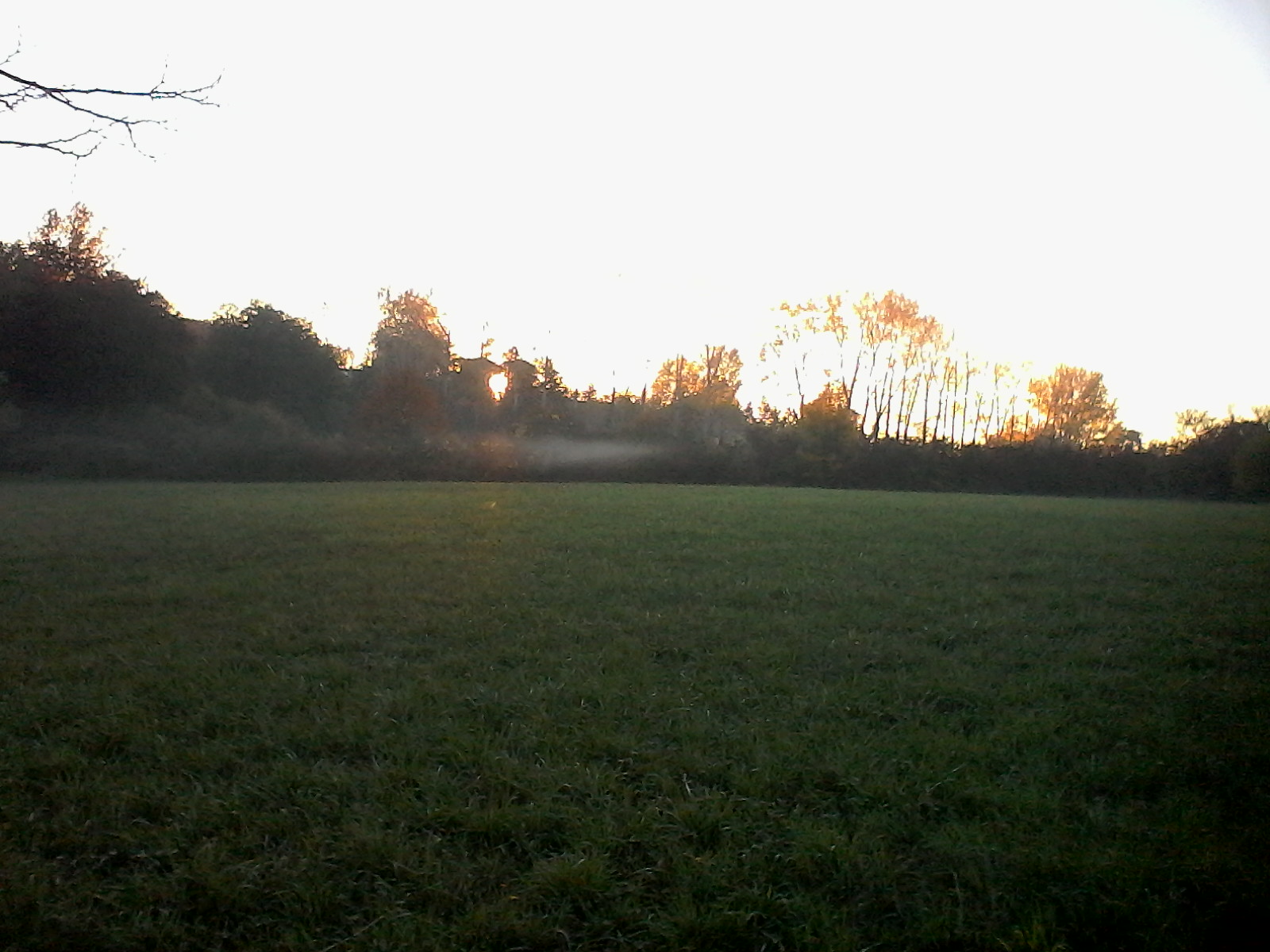 Evening fills the bottom of the meadow with mist and the orange rays of the setting sun. Sky, turquoise, darkens, deepens, and the owls fly, broad-winged where buzzards soared. I sit on the untidy wall where the house ends and the field begins, and the trees bend and sigh in the breeze, and I listen. I listen to the eerie woodwind of the orioles fluting in the golden air, a music from another world.

At the bottom of the meadow, where the stream flows over shallow stones between the roots of willow and poplar, shadows grow. And in the shadows, the quick, bright, high-stepping dance of a red fox. Moon rises and the stars. As many as the leaves in the trees. The music flutters and fades and silence falls. Peace, in this place at least, rises like the moon and the river mist, and all things are in their rightful place.

A time of growing,